This site contains affiliate links to products. We may receive a commission for purchases made through these links. We only recommend products that we would use with our own kids!

Choosing the right racket for your child is one of the most important decisions you can make as a tennis parent. Wilson manufactures many of the most popular junior tennis rackets, and the Wilson Blade 25 Junior Tennis Racket is no different.

We received a lot of questions from parents about this racket, so we took it upon ourselves to provide you our comprehensive opinion. Read on to learn about our rating for the Wilson Blade 25 and how it compares to other junior tennis rackets. 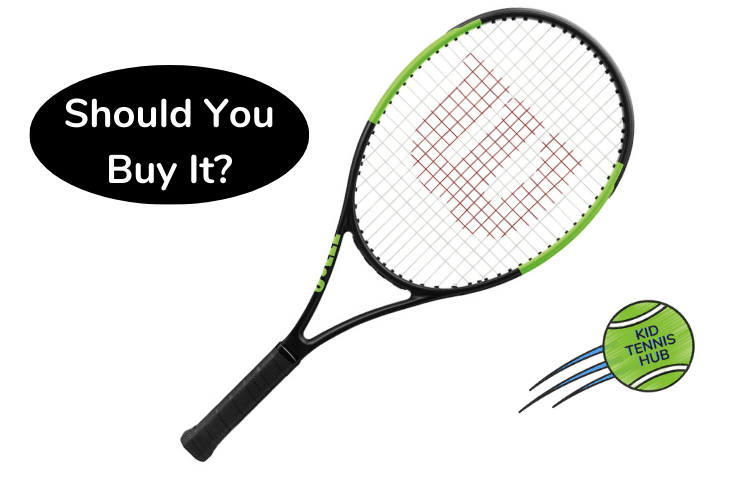 The Blade 25 Junior Tennis Racket is one of our favorite Wilson junior tennis rackets. The Blade 25 is sized ideally for children ages 9-11.

RELATED: What Tennis Racket Size is Right for My Child?

When taking into account what is important in a junior tennis racket, we have given the Wilson Blade 25 a solid 9/10 rating.

The sleek-looking frame is designed with lime green, silver, and black accents. There is also an adult version of the Blade, which is incredibly popular for players age 16 and up.

Overall, the Wilson Blade 25 Junior Racket is a great all-around option for children who are intermediate or advanced. It can still be used by beginning players, but the higher price means you should be certain that your child will be sticking with tennis for at least a while before purchasing. Our main critique of this model is that the strings break a little quicker than other junior tennis rackets. You may have to purchase new strings more often, but they should last at least five months if regularly used; they’re and not a huge cost burden as well. Nevertheless, the Blade 25 has a juicy sweet spot for increased power, precision, and accuracy, and vibrations are minimized in order to create a better overall feel.

The Wilson Blade 25 VS. Other Junior Tennis Rackets

To best gauge the abilities of the Wilson Blade 25, we compared it to the HEAD Speed Blue 25, which is another one of our favorite junior tennis rackets.

The primary difference between these two models is pricing. The HEAD racket is a more affordable option, whereas the Wilson model is relatively expensive for a young junior racket. The various other differences favor the Blade 25, making it potentially worth the higher price-point. Let’s take a look.

The two rackets are constructed out of different materials. The Wilson Blade 25 is built with graphite, and the HEAD Speed Blue 25 is made out of aluminum. This brings up the critical question many tennis parents ask: “which frame material is best for my child?”

Well, it depends. Both racket materials are used in affordable and lightweight tennis rackets, but they each have distinct characteristics. The Speed 25 uses aluminum, which is definitely an acceptable material for beginners. However, there are fewer aluminum rackets available, as the material is becoming less popular. Graphite is more common and is used in the Blade 25. This material is more durable, and we have recognized that children tend to adapt to this racket faster, regardless of their previous tennis experience. If you are concerned about potential paint chips from your child scraping their racket on the ground, then graphite is the way to go.

Similar to the Wilson Blade 25, the HEAD racket has a more-than-satisfactory grip and is also available in just one color scheme. We have found that some beginning juniors prefer this racket because it is on the lighter side weighing 7.4 ounces, whereas the Wilson junior racket weighs 9.9 ounces.

To see what the most up-to-date price is and read more customer reviews, view the Wilson Blade 25 Junior Tennis Racket on Amazon here. It is a popular piece of equipment—Wilson can occasionally run out of stock—so if you are interested in getting a great racket for your child, it is wise to order one sooner rather than later.

Whether your child is playing for fun or competition, using proper tennis gear is essential to improving their game. Investing in durable kids tennis shoes, a good tennis backpack, and other high-quality equipment can help to prevent injuries, reduce expenses in the future, and make your child’s overall tennis experience memorable.

If you have questions regarding Wilson kid’s tennis rackets or other tennis gear, please refer to our Parent’s Guide to Junior Tennis, leave a comment, or contact us directly.