If you play tennis and live in a region where rain is a possibility, then you’ve likely wondered how much rainfall is required to cancel your tennis session.

In theory, yes you can play in the rain. But it’s not something we can advise that you do, especially if the downpour is heavy.

Let’s take a look at the proposition of playing tennis on a wet court, what water does to tennis balls, and how to speed up the drying process if your court gets rained on. 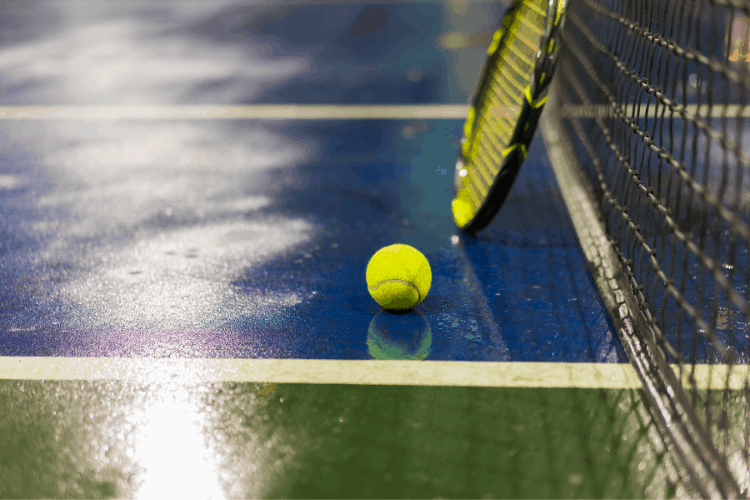 My Experience With Playing Tennis in the Rain

When I was a junior tennis player myself, I had the misfortune of growing up in a region infamous for rain—Seattle, Washington. Don’t get me wrong, I love the Pacific Northwest, especially in the Summer. But in those other 3 long seasons, it felt like the downpour would never stop.

I played on my high school’s tennis team. On multiple occasions, rain would pick up out of nowhere during a competitive match. It was up to us, the players, to decide if we wanted to keep playing or if the rain made the courts too slippery to continue.

I was always the last person to leave during these storms. I believed the rain gave me an advantage due to my style of play. I also wanted to appear macho, of course. All in all, I was lucky to not suffer a sprained ankle.

Although this climate posed many challenges for myself and other tennis players, I was fortunate enough to have access to indoor courts, inside a giant inflatable bubble. Not everyone has access to indoor courts though as countless tennis clubs have ridiculously expensive court rental rates, and many wet regions just don’t possess indoor tennis facilities. On that note, let’s take a look at the feasibility of playing tennis on a wet court.

Tennis on a Wet Court

Please keep in mind this article refers to hard courts, not clay or grass. Your shoes will have much more traction on hard court as compared to clay, though it can still be iffy. Remember that playing tennis in the rain always increases your risk of injury due to slippage. You are still at risk if you have high-quality tennis shoes, as these are not designed for traction on wet surfaces.

There is no definite yes or no answer to the question, “can you play tennis on a wet court” because it really depends on HOW wet the court is. In a light misty rain, you may be able to hit around. However, if puddles start to form, this is a clear indicator you should stop playing tennis. Puddles can be a massive slipping hazard, and they can also damage your tennis balls. More on that later.

If you are playing in the rain, be careful when moving around the white lines. These can be extra slippery due to the paint typically being newer.

Tennis balls act like round sponges when introduced to water. The small “hairs” on the outside of the ball can effectively absorb water. After rolling in a puddle, a tennis ball can more than double in weight. Hitting with these watered down tennis balls feels like playing tennis with softballs.

Water logged tennis balls are the ultimate pet peeve of many players. It gets harder to control where the ball goes, and takes much more effort to hit full strokes. A temporary fix to reduce the amount of water in a tennis ball is to backspin slice it over and over in the air.

Another downside of playing tennis in the rain is that it can potentially ruin your tennis balls. Most of the water will come out if you let them dry afterwards, but there will always be some stuck in the fibers. You’d be surprised by how much this can throw off your game if your used to regular tennis balls. If the court you’re playing on is not in pristine condition, then wet tennis balls will quickly become wet and dirty tennis balls. Might as well give them to your dog.

How Long For Tennis Courts to Dry After Rain

For a light rain, it can take anywhere from 30 to 90 minutes for a tennis court to dry. If the sun comes out, this can speed up the drying process. A lot depends on the irrigation system of your court. If water is properly funneled to a drain, there’s not much to worry about. On the other hand, large puddles may start to form if the irrigation system is not as effective. If you NEED to play tennis and won’t be denied, you can take action to dry off the wet court.

How to Dry Off a Wet Tennis Court

A court-sized tarp is the most effective way to keep a court dry, so you can play on it right after the storm clears. This can be somewhat unrealistic, though. The most popular court drying option is a manual rolling squeegee.

You (and hopefully your hitting partners) can use this tool to push water off the main field of play on the court, while simultaneously drying the parts you roll it over. Start from the middle of each service box and squeegee outwards away from the center, until all puddles are gone. This can take 5-30 minutes depending on how soaked the court is. If there is an area on the court that just won’t dry off, try using an old towel or rag to absorb it. Afterwards, we recommend you wait for the damp parts of the court to dry off naturally, so you can get back to risk-free tennis. Have further questions about how to make tennis work in a rainy climate? Feel free to reach out with any questions.

Tags: tennis in the rain

Is Tennis Safe for Kids?

USTA Tennis Link – What You Need to Know