It’s a well-known fact that tennis is one of the most footwork-dependent sports; it requires agility, speed, stamina, and quickness. Junior players should always be working on improving their footwork to give themselves a competitive edge.

Why is it important to work on tennis footwork? It’s vital in allowing you to change directions quickly, chase every ball, react fast, and maintain a competitive position on the court. By pairing the right drills with a desire to improve, any junior tennis player can turn their feet into a weapon. 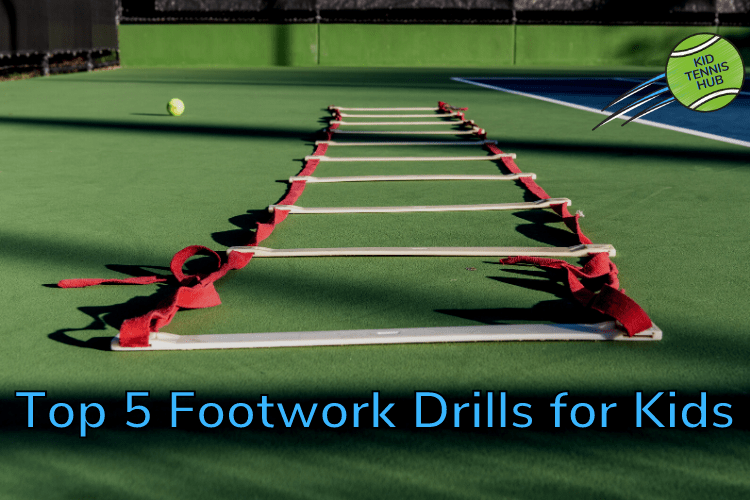 It’s optimal to start working on developing proper footwork as soon as possible when kids are developing faster both physically and mentally. The seemingly difficult task for parents and coaches is to make speed training drills fun and exciting for kids. 9 out of 10 kids would prefer to partake in tennis drills that involve hitting balls, rather than just moving their feet. It’s important to keep tennis drills as engaging as possible, while improving skillsets at the same time. As many parents know, when sport stops being fun for children, they can quickly get bored and lose motivation.

The following 5 kids tennis footwork drills for junior players are highly recommended for improving speed, quickness, agility, and stamina, while also bringing a sense of fun and excitement to the court. The coaches at Kid Tennis Hub use these exercises with our junior players, and so should you!

Junior players will especially enjoy this exercise because it’s competitive, funny, and can be practiced with friends. The rules are simple: you and your partner stand on the opposite sides of the net in the service box. Start throwing a tennis ball underhand without a racket, sending it to your partner. Then attempt to catch the ball after the first bounce and return it as fast as you can, trying to get your opponent out of position (the players should use only the area of the service boxes). Score the game like a tie-breaker and play 2-3 times, resting 2 minutes in between attempts. This exercise is aimed at improving players’ agility, footwork and reaction time.

This is another useful junior exercise for speeding up reaction time and overall movement on the tennis court. The coach or parent should stand in the middle of the court, holding two tennis balls, while the player takes a position behind the baseline on the other side. The coach or parent will throw a ball underhand in front of you, somewhere on your side of the court. Your job is to rush to the ball and catch it after one bounce and throw back. Without waiting until the first ball lands, the coach throws a second ball in a different direction. It is important that at least two tennis balls are constantly in motion. In order to ramp up the difficulty and intensity, the coach can increase the speed of throws, or toss the balls at lower heights, giving the player less time to react. Repeat the exercise 10 times; just don’t forget to warm up properly, as this drill involves sudden starts and stops as well as change of direction. Remember to hydrate properly, as this drill takes a lot out of junior players—even the older, more experienced kids can quickly become exhausted.

The spider run drill is a common exercise in youth tennis and is a modified version of shuttle sprints. We really like this kids’ tennis footwork drill because it most closely simulates actual players’ movements during a match. For this drill, you will need four tennis balls, which should be placed in different parts of the court. Place one ball around two meters in front of you, the second two meters behind you, the third two meters to the left, and the last one to the right. Start at the middle of the baseline and sprint to the right ball first, touch it and quickly return to the initial position. Then run to the ball in front of you, touch it and run backwards, after that repeat the same actions with the remaining balls. You can add more balls or change the sequence of actions to alter the drill to your liking. You can complete this exercise 5-7 times before taking a breather; just be careful not to step on the balls. Ask a partner to record your time with a stopwatch and try to improve it every practice.

Usually, you do not need much equipment for footwork drills. However, an agility ladder is one of the most useful things you can have for junior tennis footwork training. A great thing about practicing footwork with an agility ladder is that you don’t need a partner and can do it anywhere, including your driveway or backyard. Agility ladders are great for improving quickness, burst, and overall body control.

All you need to do is to put the ladder on a court, pavement, or grass, and run through it, making little steps in each part of the ladder (each foot should step in every ladder hole once), then you can stop and go a different direction, trying to keep balance. It often takes kids a few tries to get their muscle memory aligned with the drill correctly. Challenge yourself to achieve fundamental perfection rather than going for speed at first; for example, if you touch part of the ladder you must do 5 burpees as a small punishment. Repeat the drill 10 times. There are many creative variations of this drill such as the “Karaoke” footwork drill. Search for drill ideas on YouTube or try creating your own.

Training cones are a simple, but effective agility equipment that can be used on and off the court to improve footwork. For a basic cone drill, the coach or parent should place several cones on the baseline, making sure there is enough space between each cone. Kids should move around the cones in circles, using quick small steps. It’s essential to take advantage of pivoting toes to change direction quickly. This drill should be done in both directions, clock-wise and counter-clockwise, and it should be repeated several times with minimal breaks. Cone drills are super simple. We like cones more than tennis ball placeholders because it’s far harder to slip and fall on a cone.

To sum it up, having good footwork is a key to success and this aspect of the game needs a lot of practice and dedication. Ivan Lendl, one of the greatest tennis players of all time, once said: “It doesn’t matter how good your shots are if you can’t get to the ball.” The sooner kids and junior players start proper footwork training, the faster they will improve in other parts of their game such as strokes, strategy, and the mental side of tennis. These developmental skills fall hand in hand more than you’d think! Now that you know some great footwork drills, check out our Favorite Hitting Drills and Tennis Games for Kids.

How to Become USPTA Certified